SUNBIRDS IN MY GARDEN

December was a month of baking more than photography. But on 1st January 2017, I spotted a Brown-throated Sunbird in my garden, and this has relaunched interest in photographing birds again! So far I have seen two species of Sunbirds and one Flowerpecker in my garden. Only the males are the ones with the colourful features as Nature’s way of attracting a potential female mate.

“ The sunbirds and spiderhunters make up a family, Nectariniidae.They are small, slender passerine birds, usually with downward-curved bills. Many are brightly coloured, often with iridescent feathers, particularly in the males. Many species also have especially long tail feathers. Their range extends from Africa to Australia, across Madagascar, Egypt, Iran, Yemen, southern China, the Indian subcontinent, the Indochinese peninsulas, the Philippines, Southeast Asia and the surrounding Pacific islands, and the uppermost part of northern Australia. The number of species is greater in equatorial and tropical regions.

​There are 132 species in 15 genera. Most sunbirds feed largely on nectar, but will also eat insects and spiders, especially when feeding their young. Flowers that prevent access to their nectar because of their shape (for example, very long and narrow flowers) are simply punctured at the base near the nectaries, from which the birds sip the nectar. Fruit is also part of the diet of some species. Their flight is fast and direct, thanks to their short wings.
The sunbirds have counterparts in two very distantly related groups: the hummingbirds of the Americas and the honeyeaters of Australia. Some sunbird species can take nectar by hovering like a hummingbird, but they usually perch to feed.” -Wikipedia. 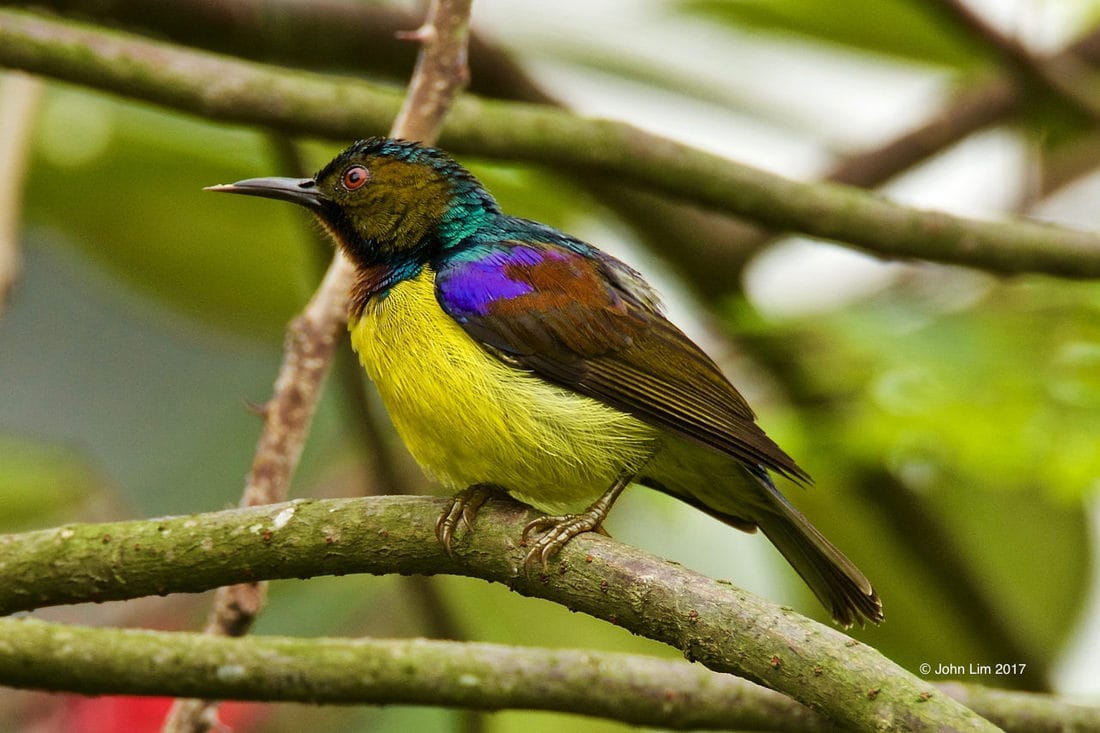 ​”The Brown-throated sunbird is a relatively large, heavy sunbird with a thick bill. Measuring some 14 centimetres (5.5 in) in length, with males averaging slightly larger than females. Like most sunbirds, the male brown-throated sunbird is more colourful than the female. The male has iridescent green and purple upperparts with chestnut on the wing-coverts and scapulars; it is primarily yellow below. The female is olive-green above and yellowish below”.-Wikipedia. 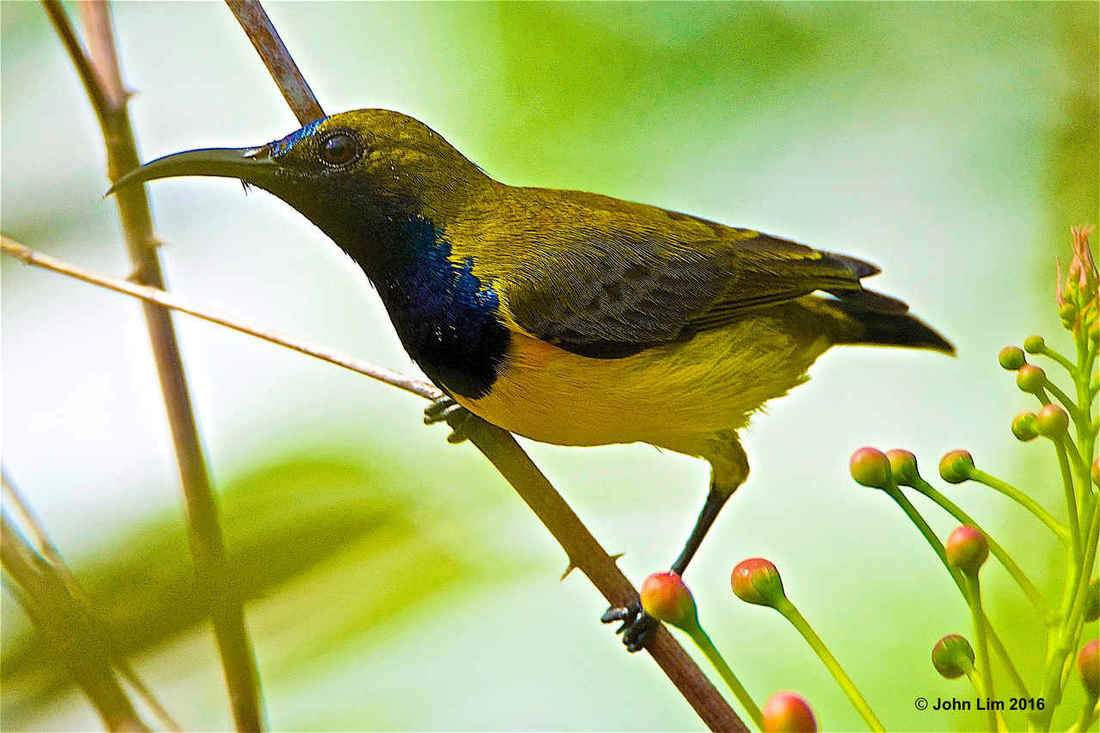 ​”The Olive-backed sunbird (Cinnyris jugularis), also known as the Yellow-bellied sunbird, is a southern Far Eastern species of sunbird. They feed largely on nectar, although they will also take insects, especially when feeding their young. Their flight is fast and direct on their short wings. Most species can take nectar by hovering, but usually perch to feed most of the time.

This bird is common across southern China and Southeast Asia to Queensland and the Solomon Islands. They are small songbirds, at most 12 cm long. In most subspecies, the underparts of both male and female are bright yellow, the backs are a dull brown colour. The forehead, throat and upper breast of the adult male is a dark, metallic blue-black. In the Philippines the males of some subspecies have an orange band on the chest, in Wallacea and northern New Guinea some subspecies have most of the underparts blackish, and in southern China and adjacent parts of Vietnam most of the underparts of the male are greyish-white. Originally from mangrove habitat, the olive-backed sunbird has adapted well to humans, and is now common even in fairly densely populated areas, even forming their nests in human dwellings.”- Wikipedia. 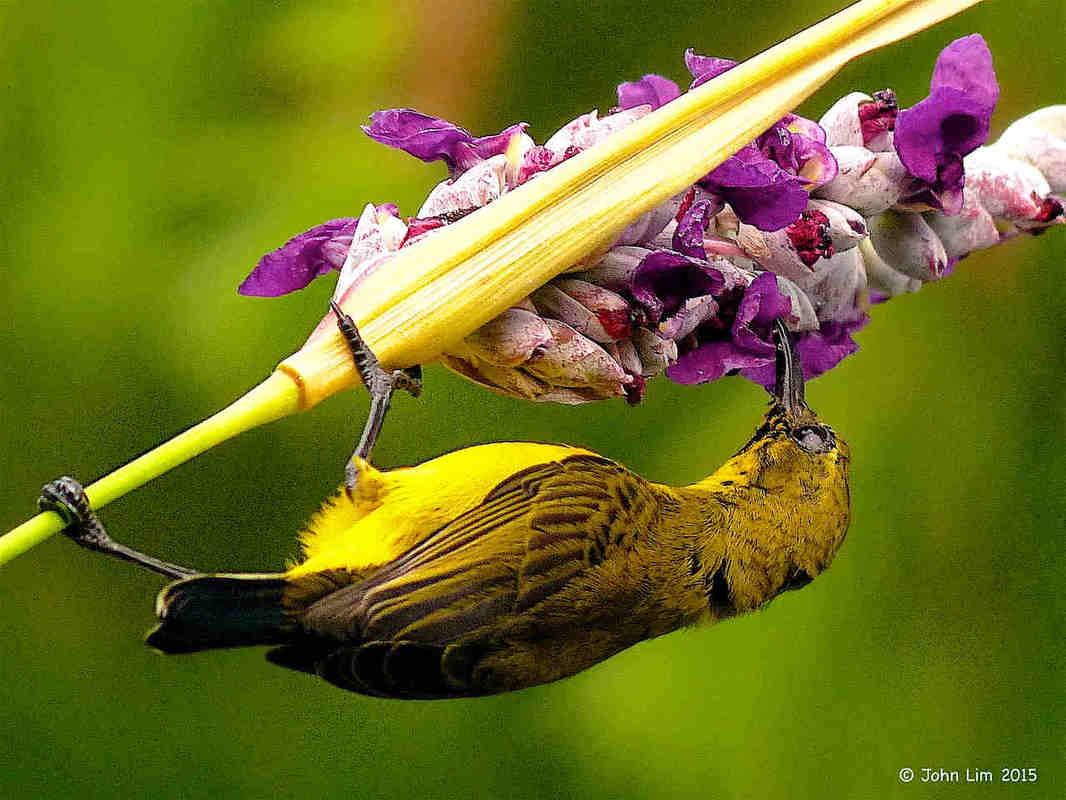 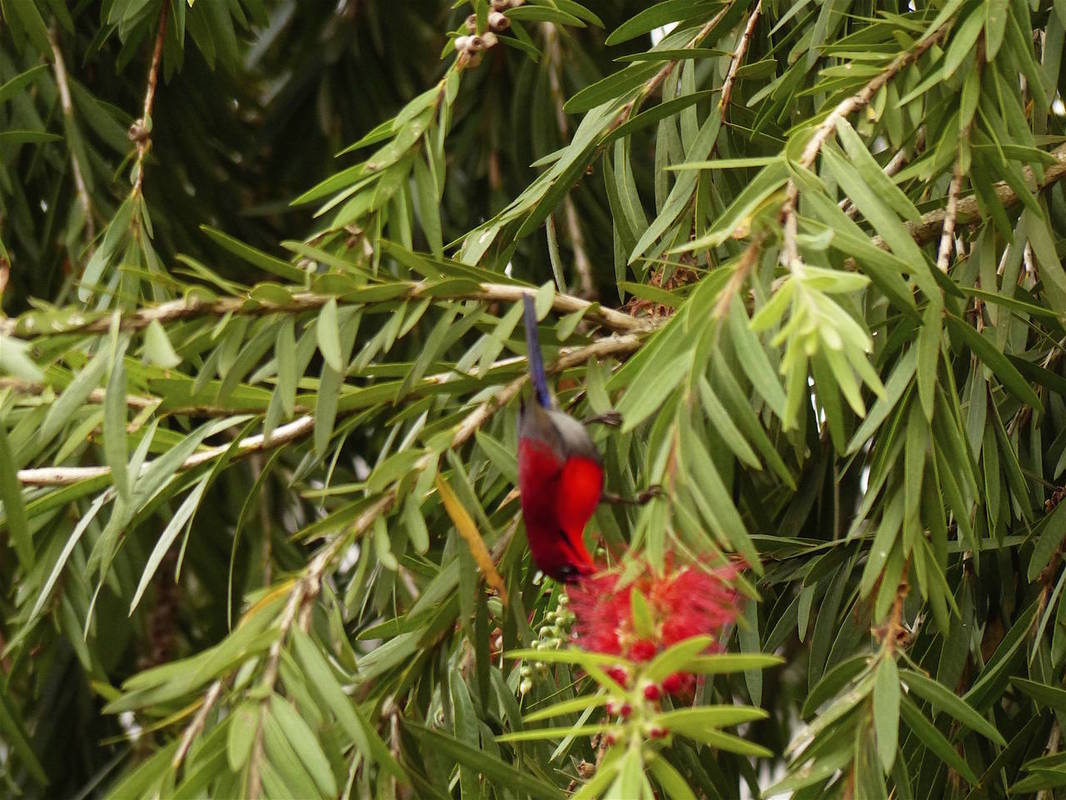 The crimson sunbird (Aethopyga siparaja) is a species of bird in the sunbird family which feed largely on nectar, although they will also take insects, especially when feeding the young. Flight is fast and direct on their short wings. Most species can take nectar by hovering like a hummingbird, but usually perch to feed most of the time. A resident breeder in tropical southern Asia from India to Indonesia. Two or three eggs are laid in a suspended nest in a tree. This species occurs in forest and cultivated areas. Crimson sunbirds are tiny, only 11 cm long. They have medium-length thin down-curved bills and brush-tipped tubular tongues, both adaptations to their nectar feeding.The adult male has a crimson breast and maroon back. The rump is yellow and the belly is olive. The female has an olive-green back, yellowish breast and white tips to the outer tail feathers.In most of the range, males have a long green-blue tail. Their call is chee-cheewee. The crimson sunbird was declared the National Bird of Singapore on Oct. 31, 2015. 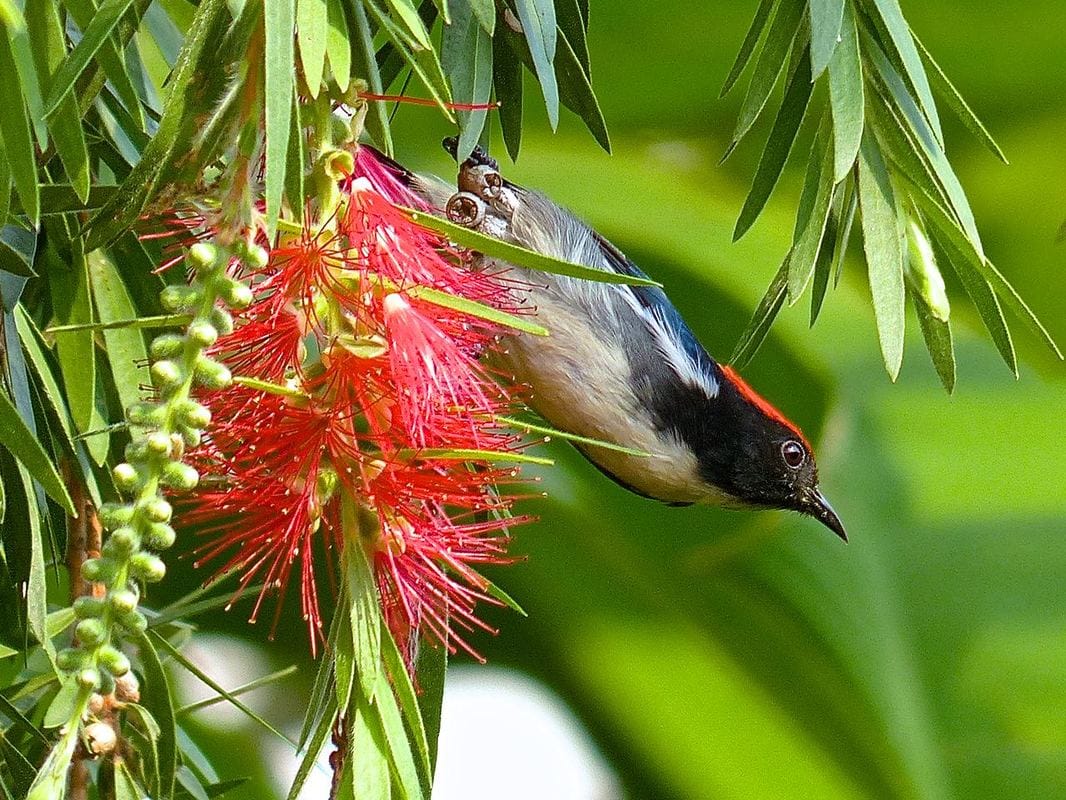 “​Measuring 9 cm (3.5 in) and weighing 7 to 8 grams (0.25 to 0.28 oz), the Scarlet-backed flowerpecker is a small bird with a short tail. It exhibits sexual dimorphism. The male has a navy blue face, wings and tail, with a broad bright red stripe from its crown to its upper tail coverts. The female is predominantly olive green with a black tail and scarlet upper tail coverts and rump. Both sexes have creamy white underparts, black eyes and legs, and a dark grey arched bill. The juvenile has plumage similar to the female but has an orange bill and lacks the bright red rump. The flowerpeckers are a family, Dicaeidae, of passerine birds. The family comprises two genera, Prionochilus and Dicaeum, with 44 species in total. The family has sometimes been included in an enlarged sunbird family Nectariniidae.”-Wikipedida.

Source: All the above photos were taken in my garden at some time or other. Data from Wikipedia.

​”It does not matter how slowly you go as long as you do not stop.” -Confucius. 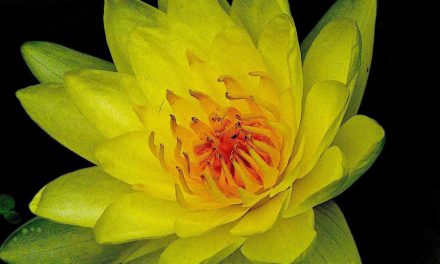 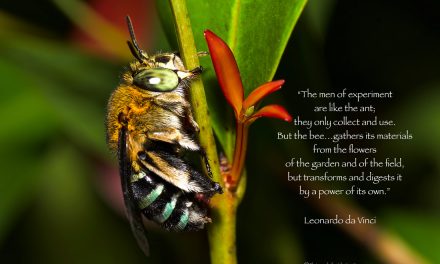 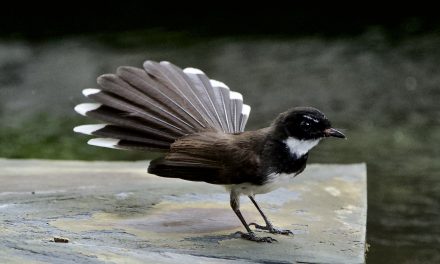