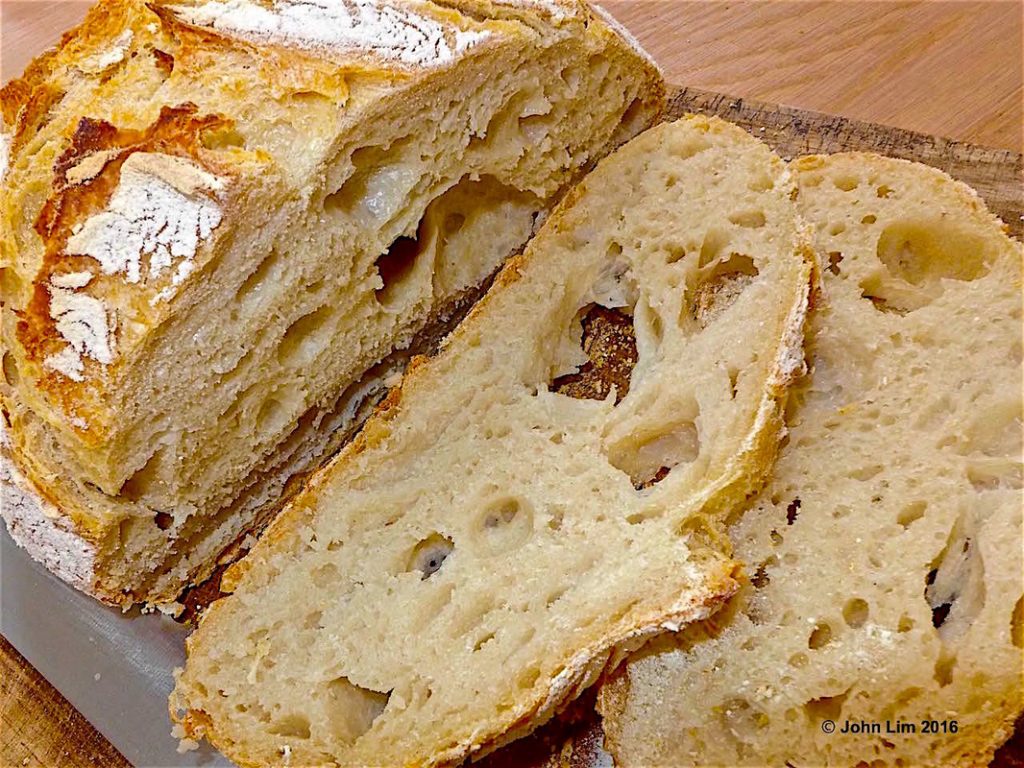 The no-knead bread was thought to have been first described in the 1999 cookbook ‘No Need to Knead’, written by California baker Suzanne Dunaway, and author Jeff Hertzberg notes such a method before the late 1990s in Italy. In addition, famed gospel composer and song collector Albert E. Brumley published a recipe for “No-Knead Bread” in his 1972 song collection and cookbook, All-Day Singin’ and Dinner on the Ground, with a similar baking and rising process.

In 2007, Hertzberg and fellow author Zoe François published Artisan Bread in Five Minutes a Day, which uses a no-knead method of stored and refrigerated dough that is ready for use at any time during a 5- to 14-day period.

New York Times food columnist Mark Bittman described Lahey’s method in his November 8, 2006 column The Minimalist. Bittman praised the bread for its “great crumb, lightness, incredible flavor [and] enviable, crackling crust.” Two years later, he noted the recipe’s “immediate and wild popularity,” and a 2009 cookbook described Bittman’s column as “one of those recipes that literally change the culinary scene with discussions on hundreds of blogs in dozens of languages around the world. -Wikipedia.

The recipe given below has been adapted from Jim Lahley’s original, to suite my need for a slightly smaller loaf. My hydration is 70% as compared with 75%. For me, it makes the wet dough more manageable.

The method uses a long rise instead of kneading to align the dough’s gluten molecules with each other so as to produce a strong, elastic network, resulting in long, sticky strands. The automatic alignment is possible because of the wetness of the dough, which makes the molecules more mobile. Wet doughs, which use a water weight of about 75% that of the flour (hydration), require more salt than conventional doughs, about 2% of the flour weight. 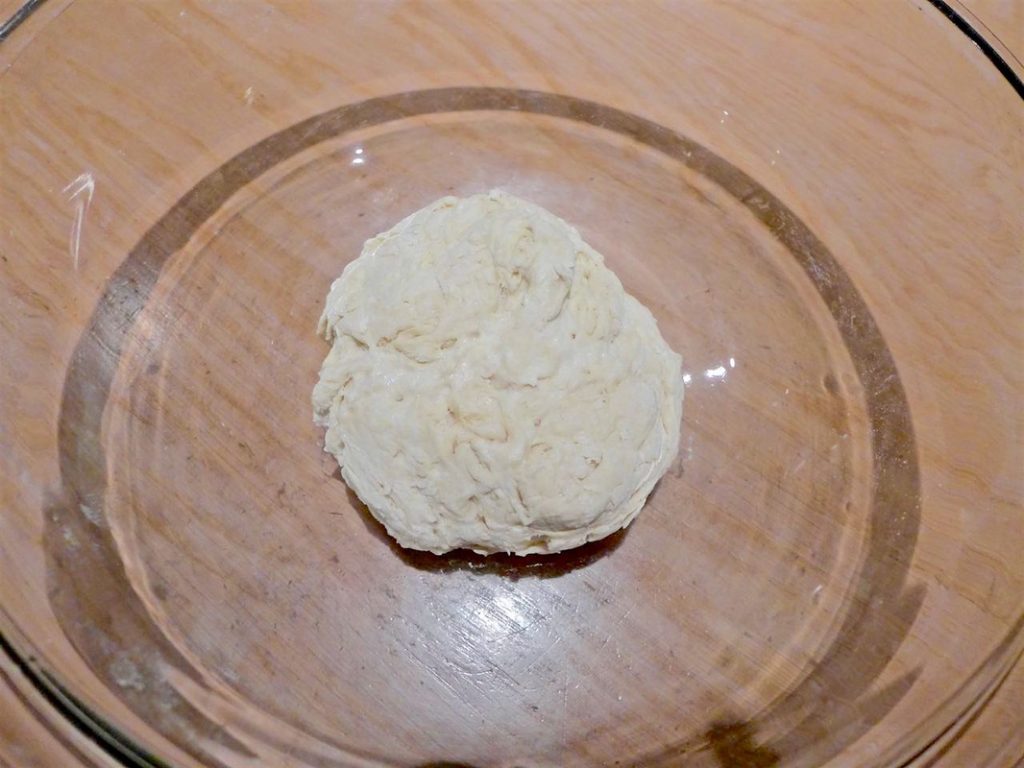 Method:
The night before you bake, mix all the ingredients together in a bowl, and then cover the sticky dough, leaving this at room temperature overnight.

The risen dough next day.

Next day, gently transfer the risen dough on to a very well floured surface and fold the edges of the dough inwards towards the centre, going around the the entire edge of the dough. Repeat this for 1-2 times more to form a ball, and place this ball of dough on a well floured towel the uneven side down. 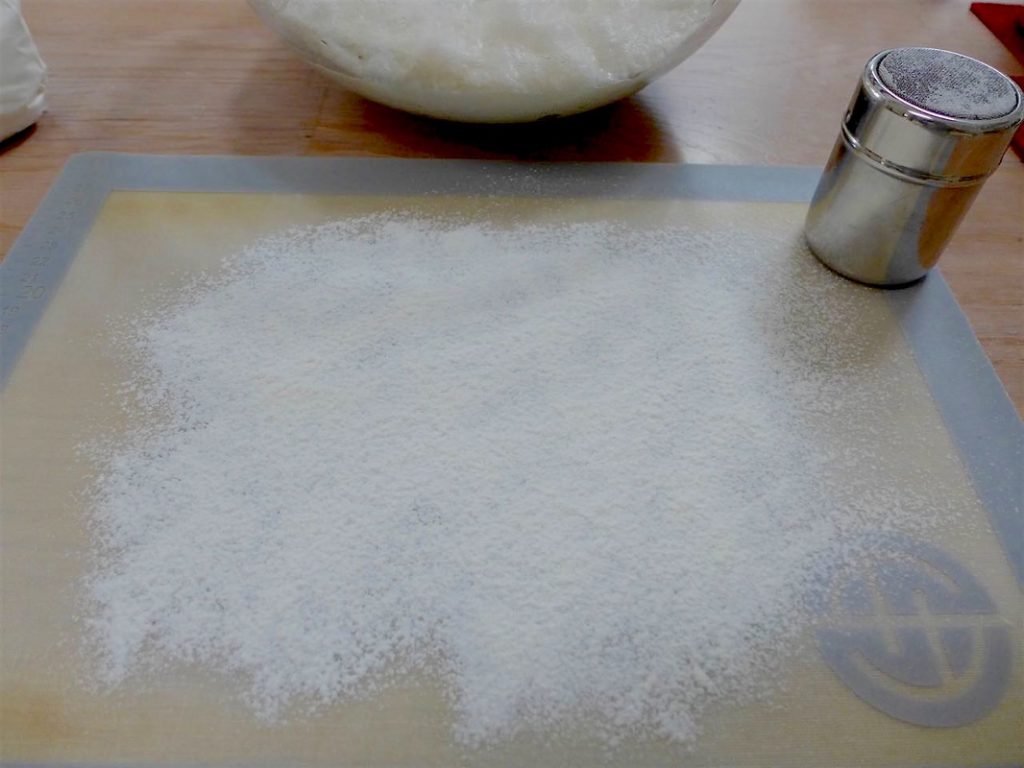 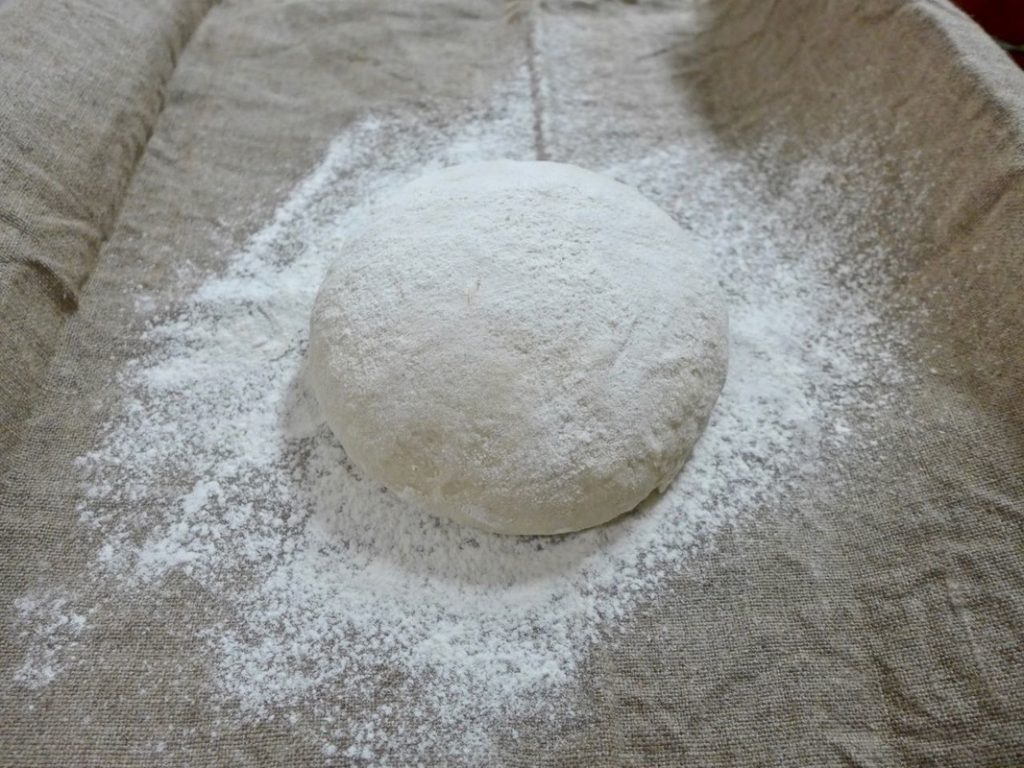 Use a well-floured towel to proof dough. 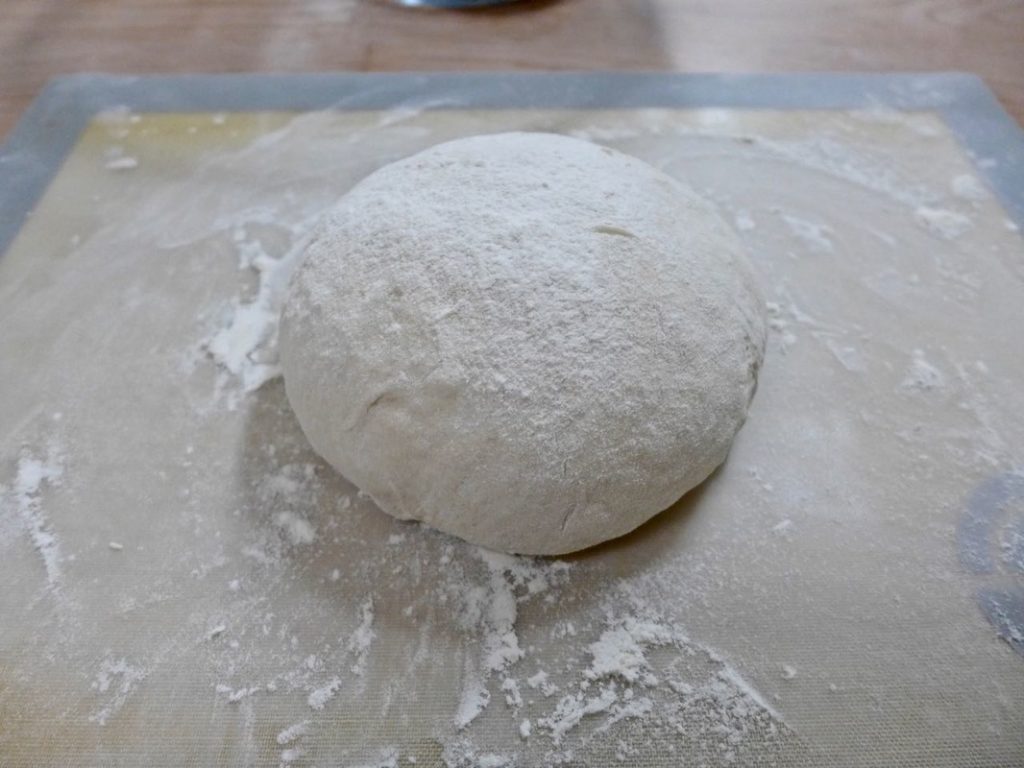 Formed into a ball. 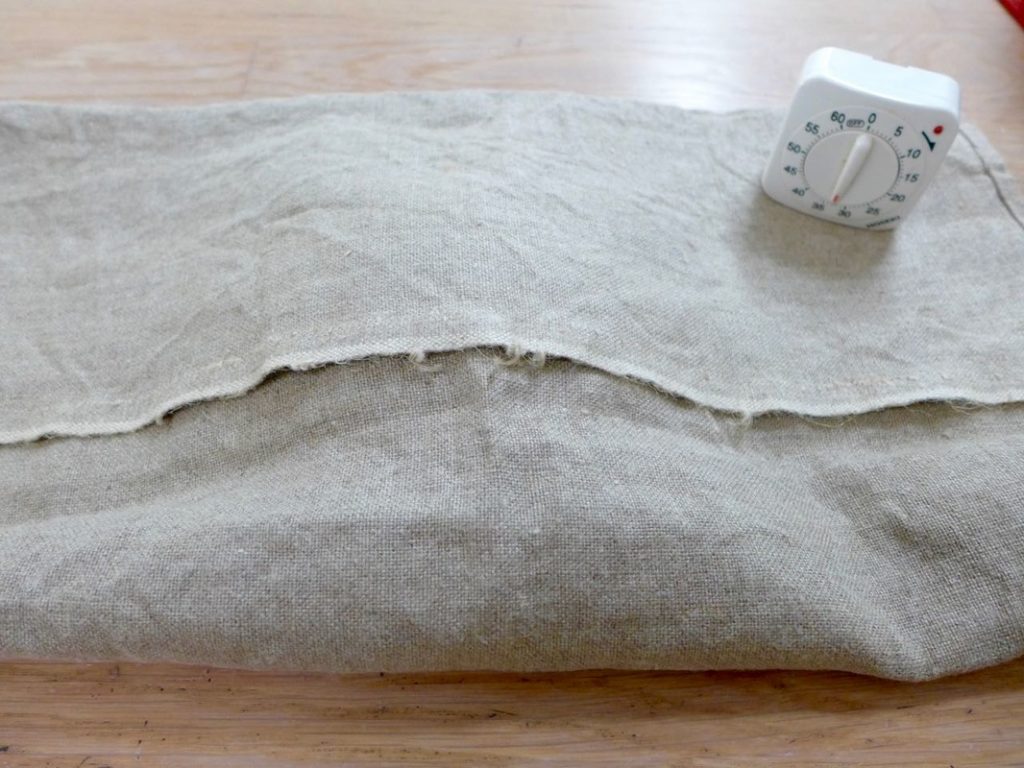 Covering the dough with the same towel.

Sprinkle more flour on the smooth rounded surface of the dough which is now on top, and cover this with the towel. 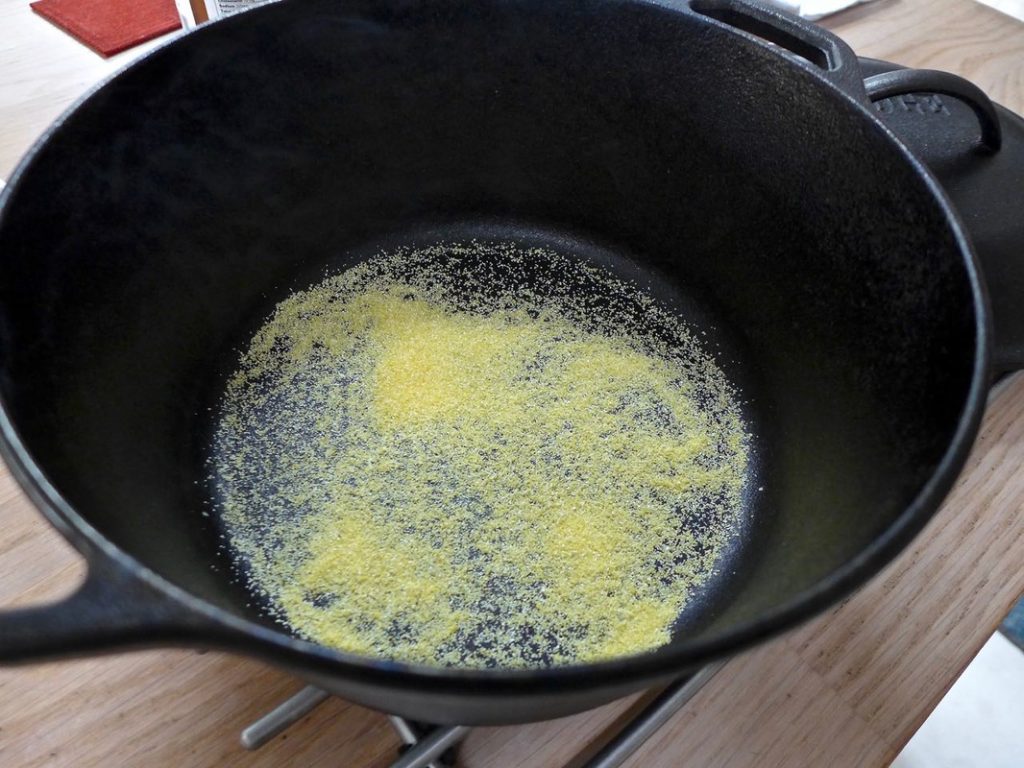 Sprinkle some polenta or cornmeal. 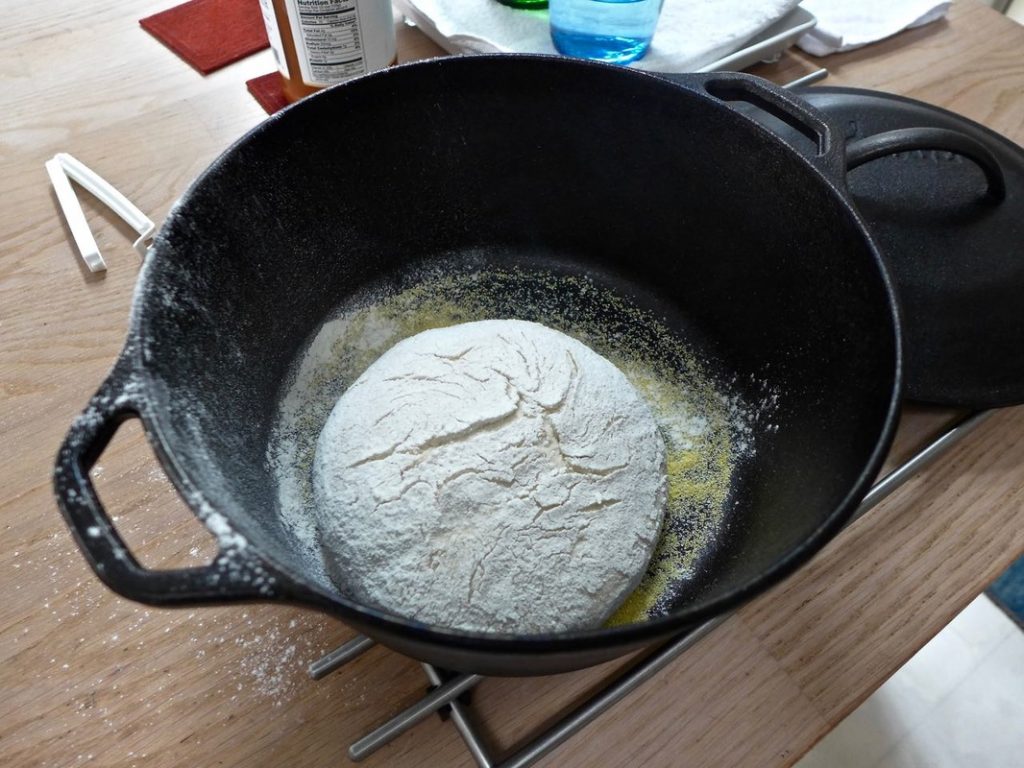 Flip the dough into the pot, rough side now up.

After proofing an hour and having fired up the oven containing the Dutch oven inside to 240˚C. When the Dutch oven is hot, take it out, and remove the hot cover. Sprinkle some polenta or corn meal on the bottom of the Dutch oven so that the dough will not stick to the base. Then tip the the ball of dough into the Dutch oven, which now has the rough side up, the smooth side down. Cover with the lid and replace into the oven for 30 minutes. After this time, remove the lid, and continue baking the loaf inside the Dutch oven to brown it. This may take another 15 to 20 minutes. 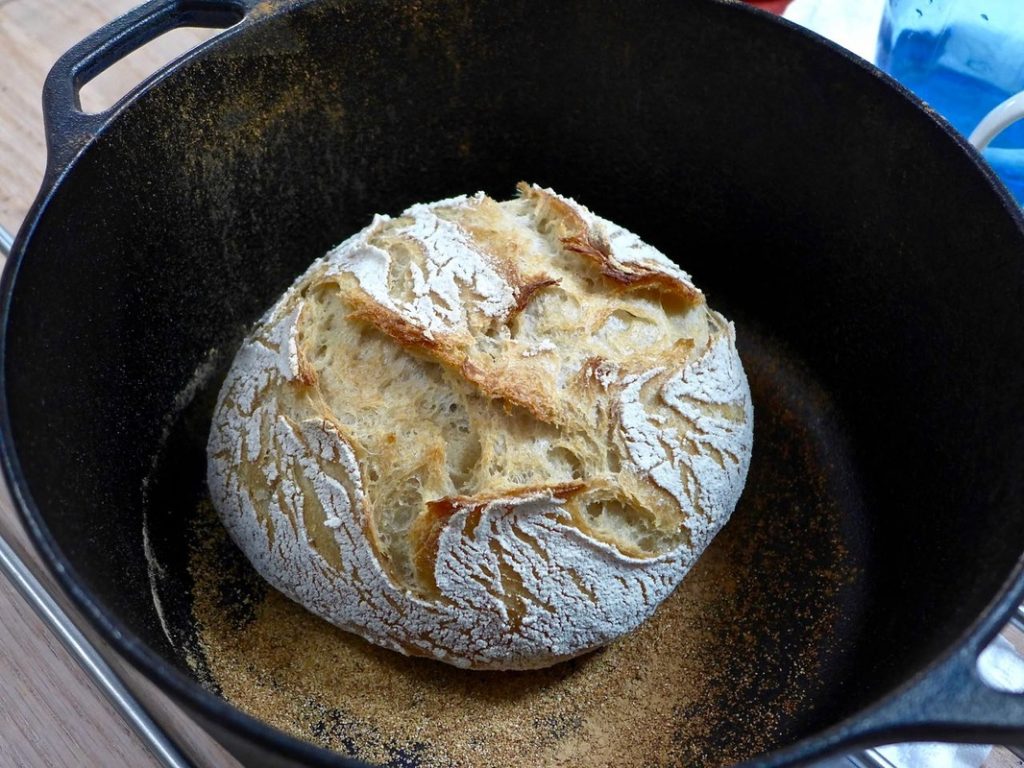 The finished product still in the hot Dutch Oven. 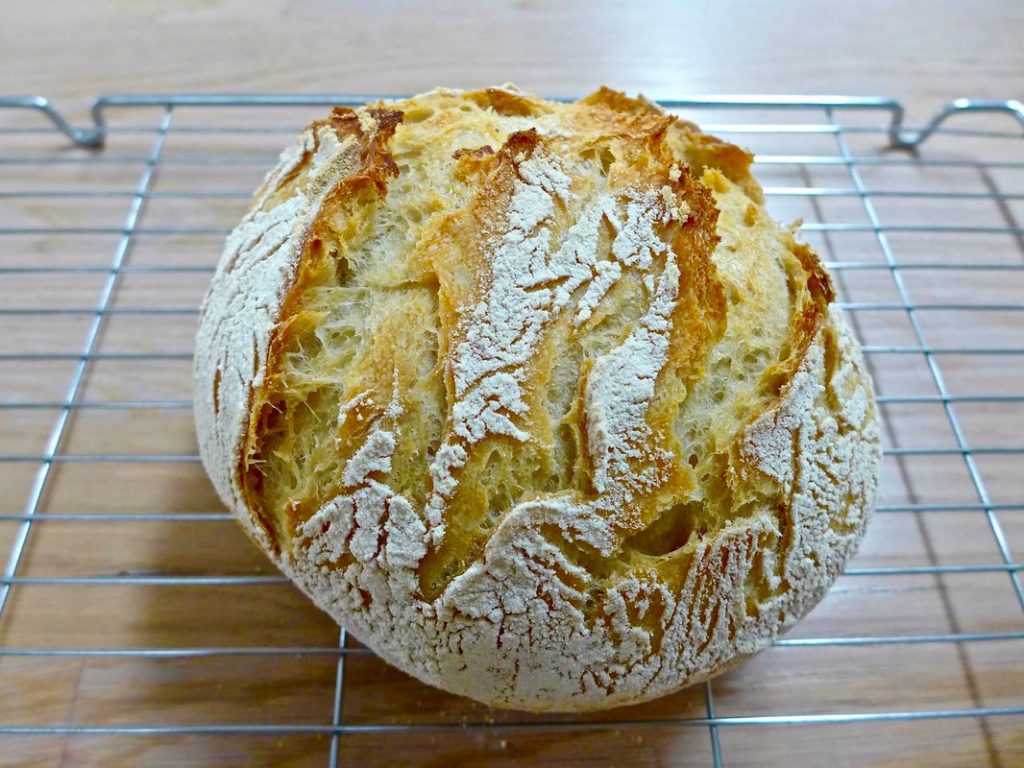 Remove the loaf and cool this on a metal rack before cutting. 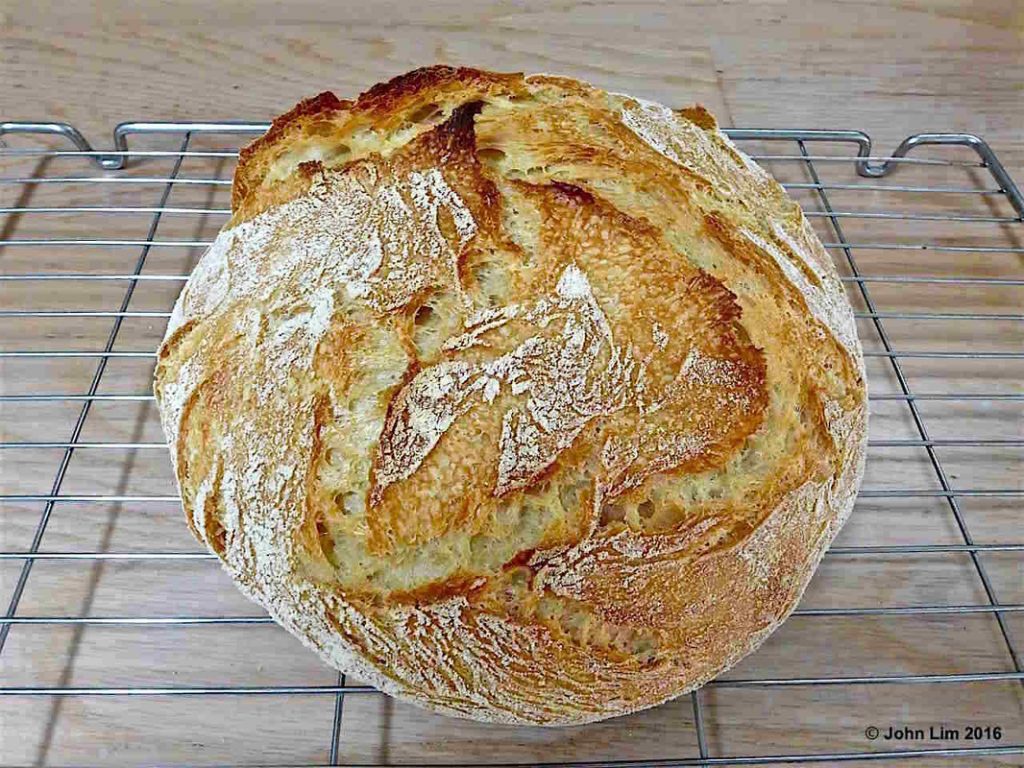 A second loaf made the next day using the same method to show consistency. This loaf was baked at 250˚C.

“Our greatest weakness lies in giving up.
The most certain way to succeed
is always to try just one more time.”
― Thomas A. Edison 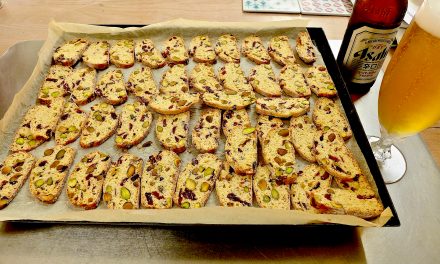 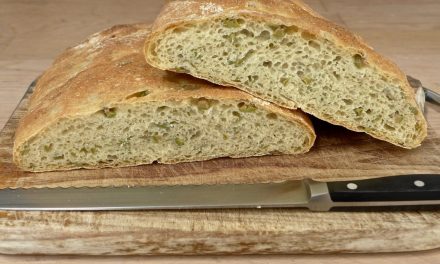 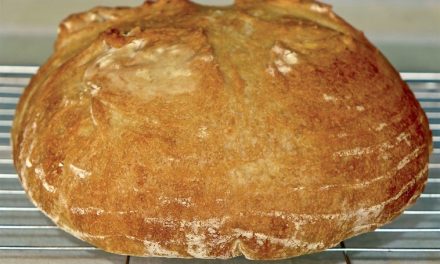 NO KNEAD BREAD IN 3 HOURS? 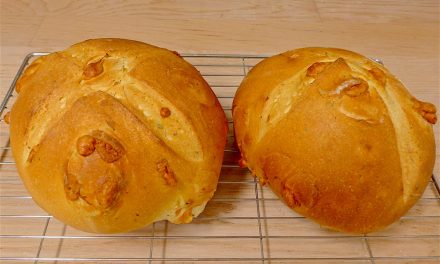