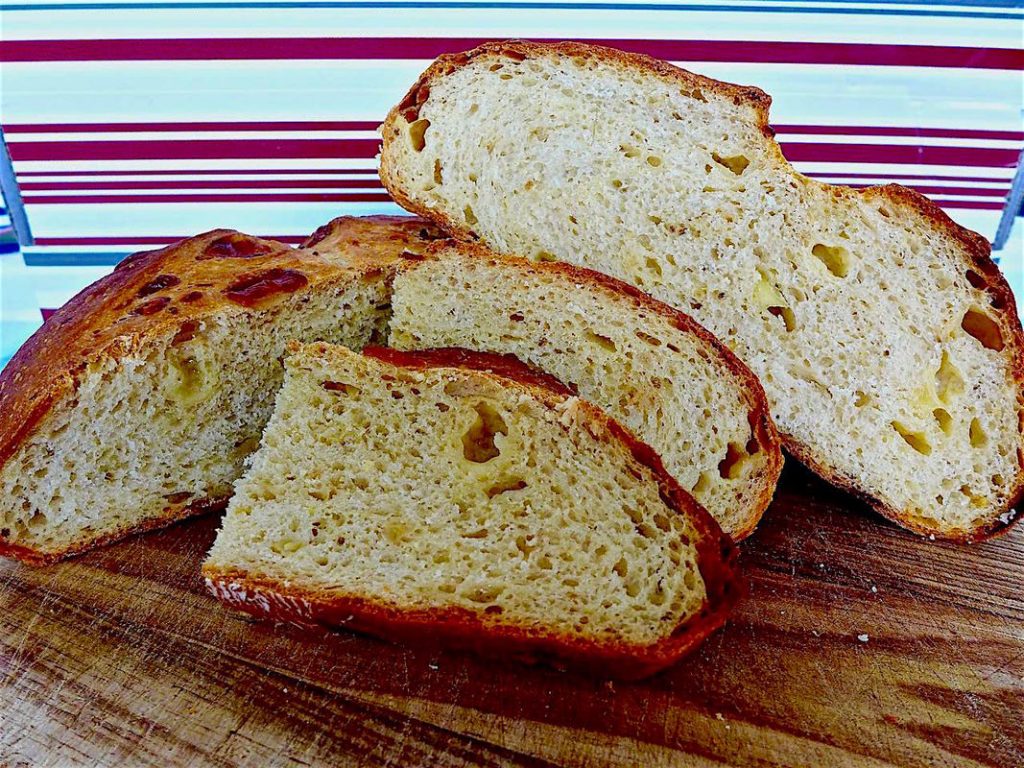 The sliced bread showing the moderately big holes in the soft crumb spotted with cheese.

I have been baking Gruyere cheese bread with green or black olives, incorporating freshly chopped rosemary leaves and grounded black pepper corns. These are super delicious breads! Since I have extra Gruyere cheese as left overs, I thought for the next bake I would try using a fresh fennel bulb with fennel seeds in the bread. The recipe and method are below, from the internet but tweaked by me. 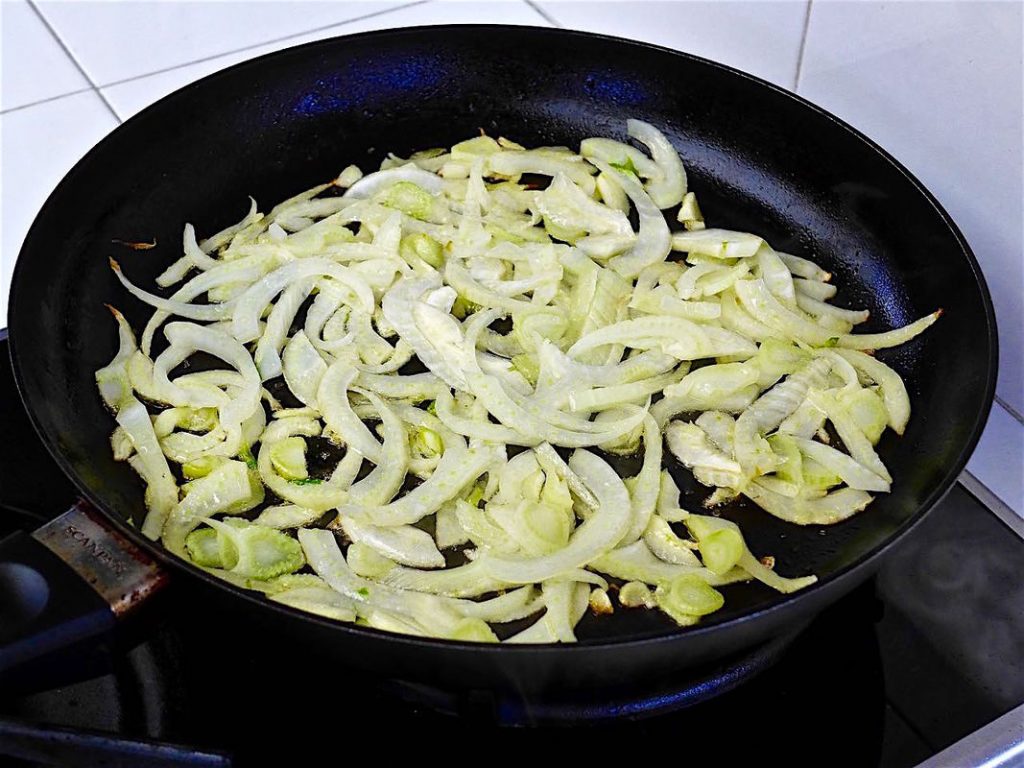 The sliced fennel before frying. 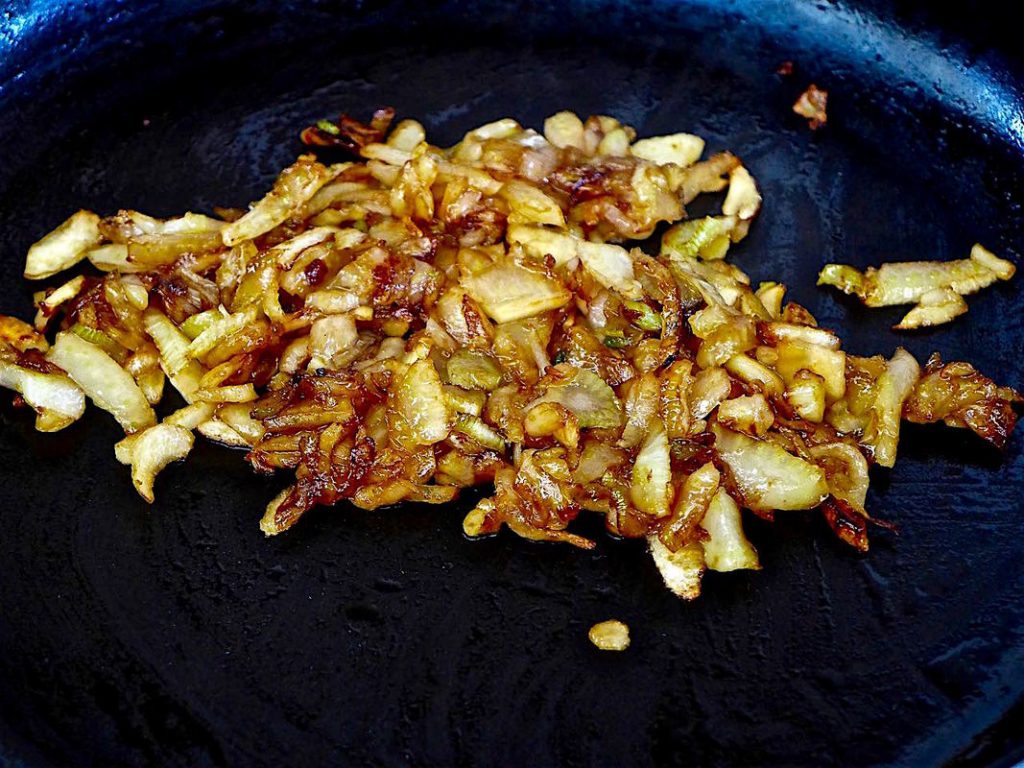 Method:
The day before, I mixed 1/2 cup flour and 1/2 cup filtered water in a bowl, and added 1/4 teaspoon dry yeast for the starter. The original recipe does not call for this step, but I much prefer the oven rise using a starter. It also given a nicer texture to the crumb.
To make the caramelised fennel: Add the olive oil to a heavy skillet over medium high heat. Add the sliced fennel in a single layer and dust with sugar and salt.  Allow to cook without moving for 3-4 minutes.  Turn over and continue on the other side till both sides are deeply caramelised.  Set apart to cool. 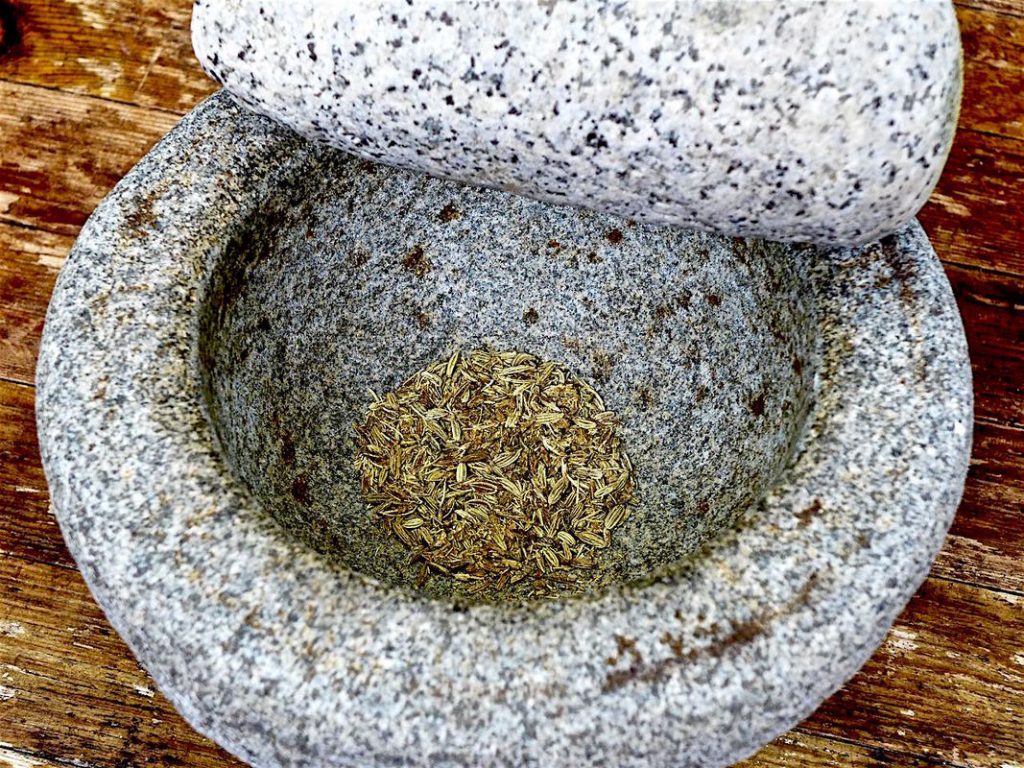 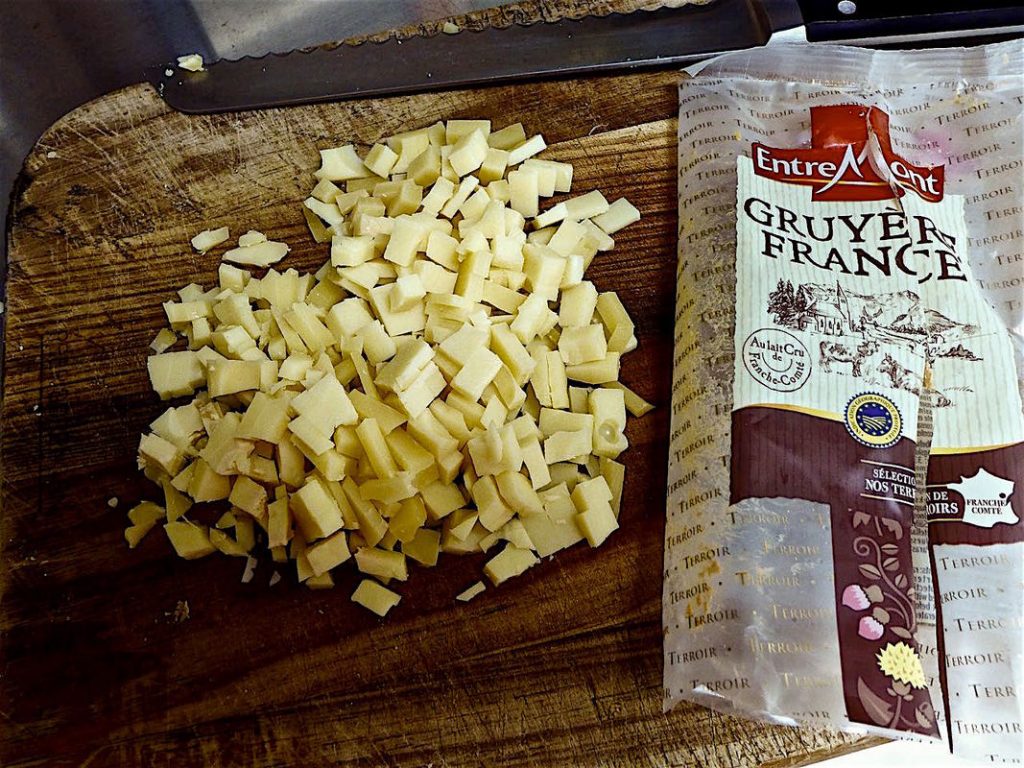 For the bread: The following day, into a large mixing bowl, combine all of the starter, flour, yeast, honey and water. I use a Kitchen Aid bowl and stand mixer. Mix to combine and allow to rest for about 15 minutes. Add the olive oil, and salt to the bowl and stir again to combine into a shaggy ball. Knead for 7 to 10 minutes until dough is smooth and elastic, then add in the caramelised fennel and the grounded fennel seeds. Mixed these into the dough. Then form the dough into a round ball and set aside to proof for 20 minutes.

After this time, divide the dough into two if you want two small loaves, or leave it as one for a large loaf. Set these on baking paper and proof, covered with a towel, for a further 45 minutes. Meantime, fire up your oven to 240˚C with a shallow metal tray (for steaming) on the baking stone.
When the dough has more or less doubled in size, spritz water on their surface and scored this with a sharp serrated knife. You may wish to coat the surface instead with some olive oil, and sprinkle some fennel seeds.

Transfer the prepared dough into the oven and bake at 230˚C for 25 to 30 minutes or until deep golden brown. Don’t forget at the start, to add in a 1/2 cup of boiling water to the shallow metal tray for steam. 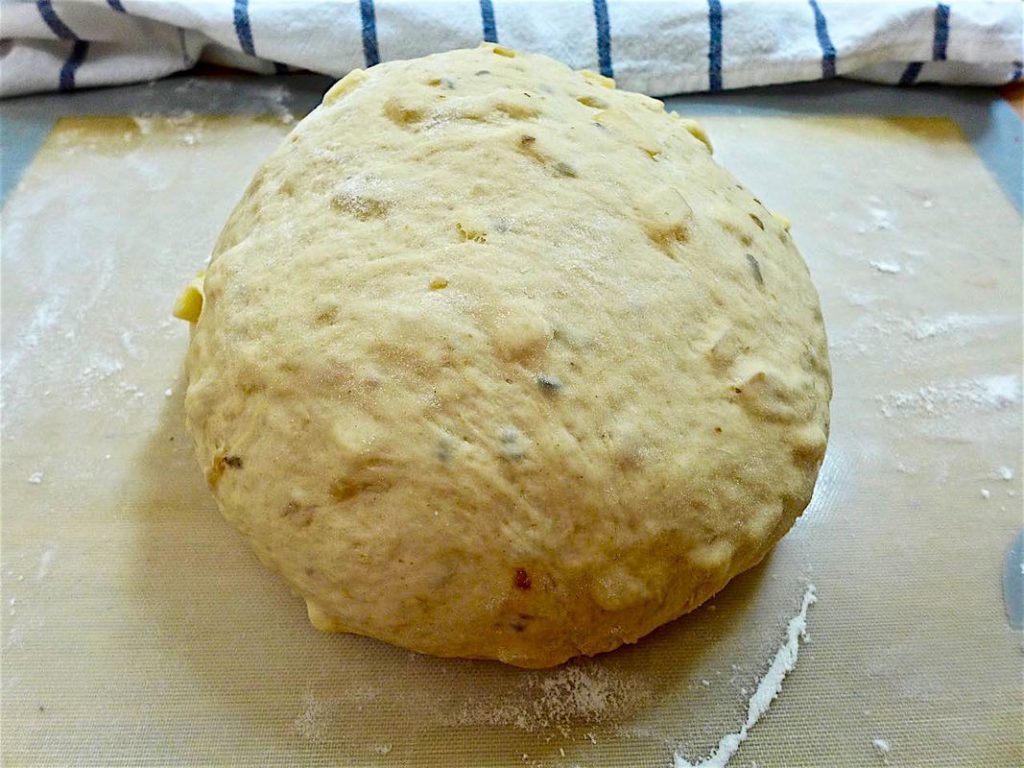 The dough shaped into a ball and sitting for the first proof. 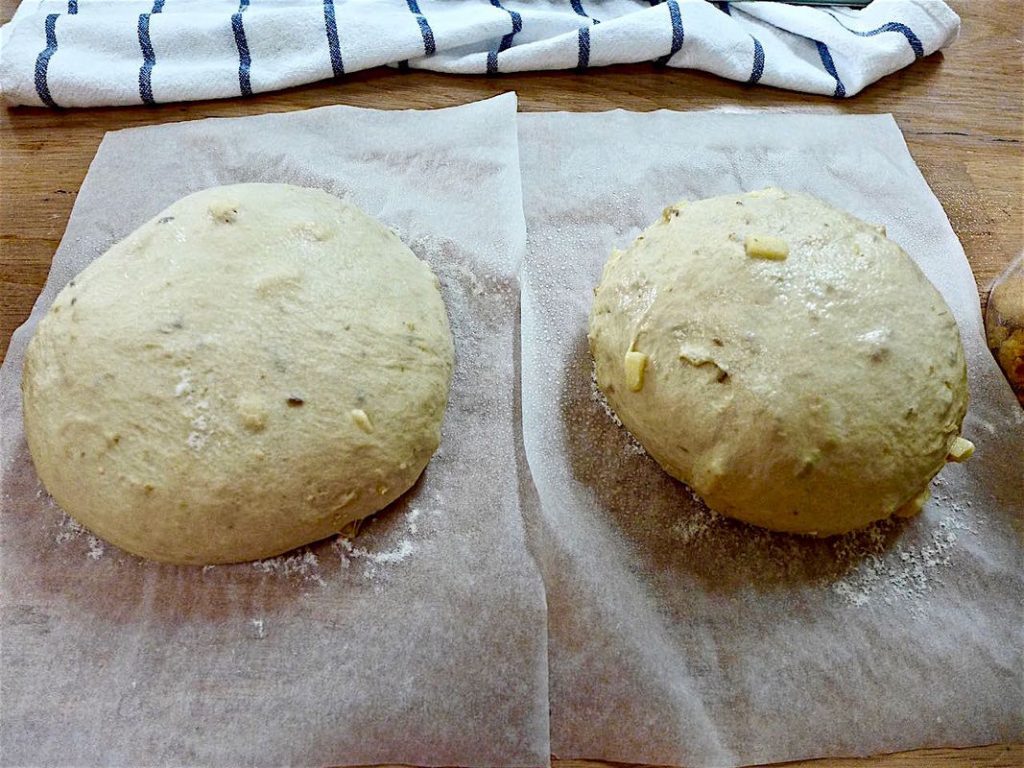 Divided into two and starting the 2nd proof. 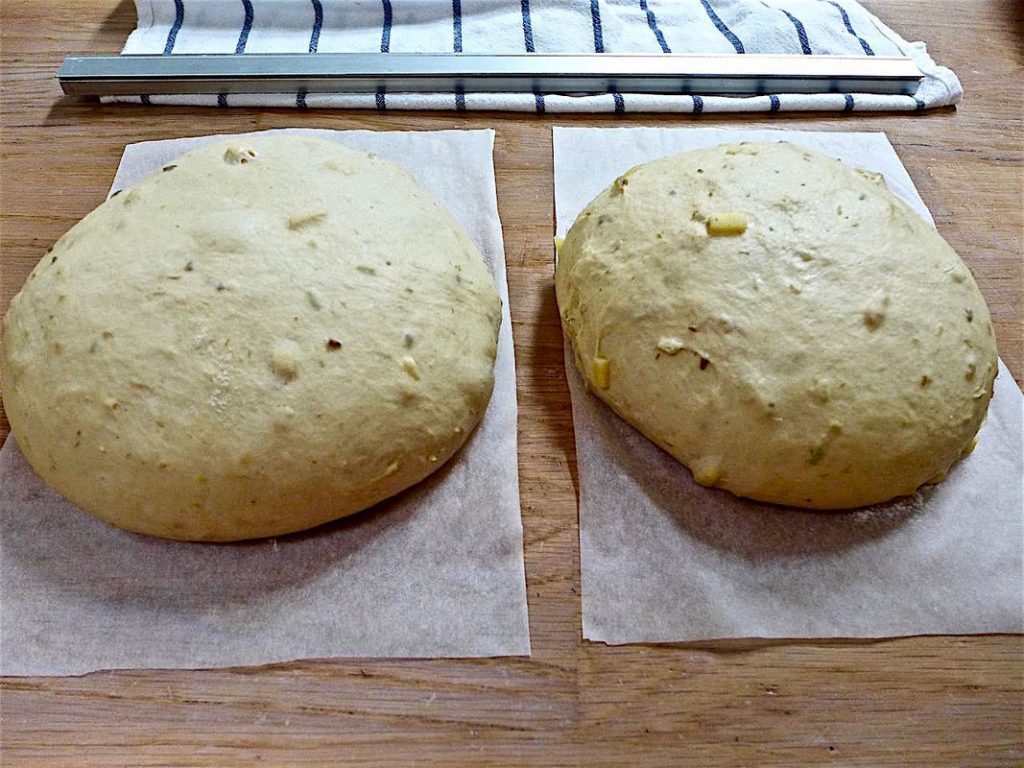 The second proofing time varies with your ambient temperature. In warm weather, the proofing time may be shorter. You need to keep a watch periodically to see it the dough is ready. 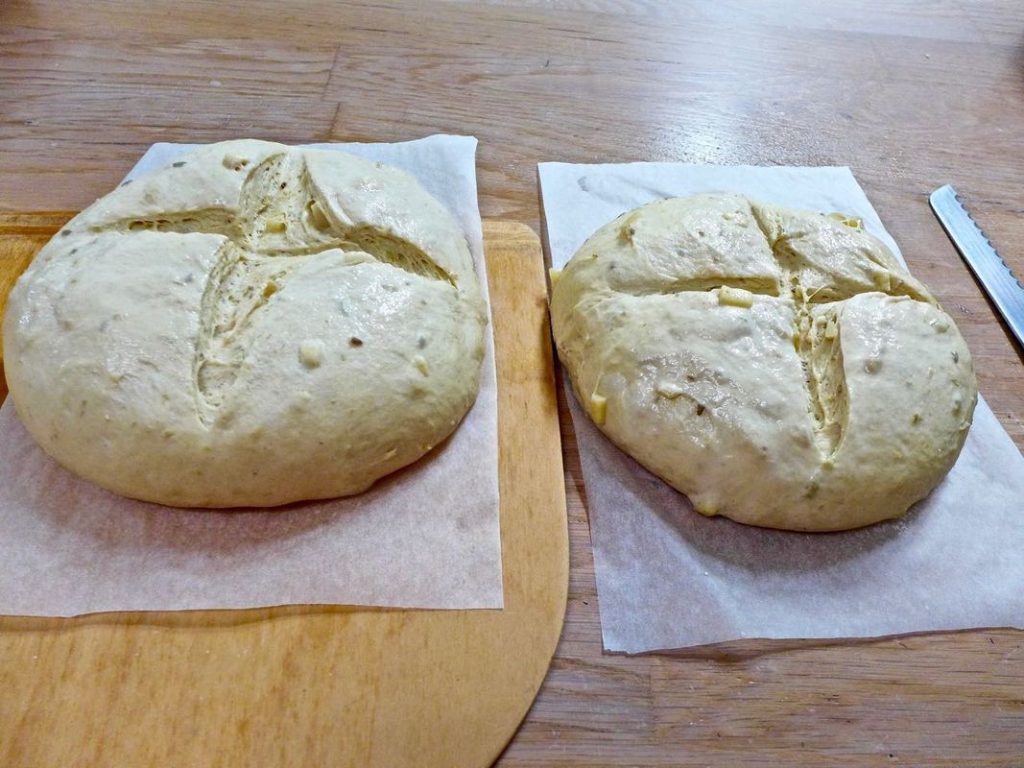 Dough scored before going into the oven. 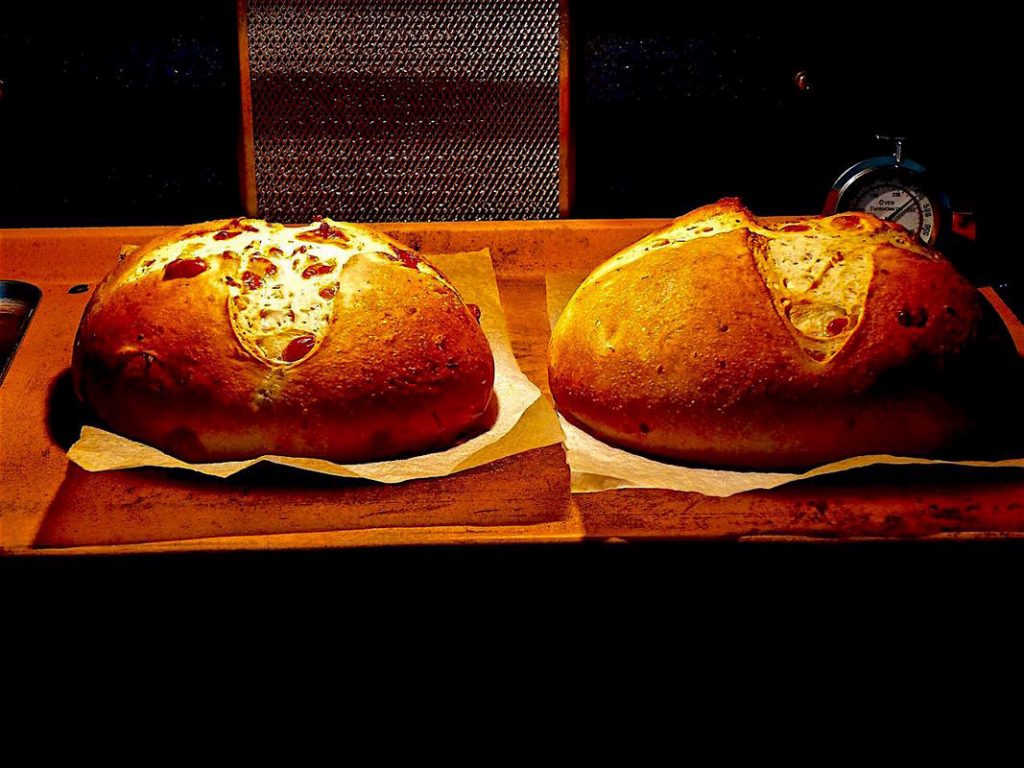 Baking on the hot stones.

I found that the loaves were getting dark rather quickly, so I covered them with an aluminium foil for 5 to 10 minutes to slow this down. I also question the need for  1/3 cup of olive oil in the dough. I think you can add about 2 tablespoons of the oil and it will not make a difference. Just ensure the resulting dough mixture has the right smooth, elastic texture before proofing. 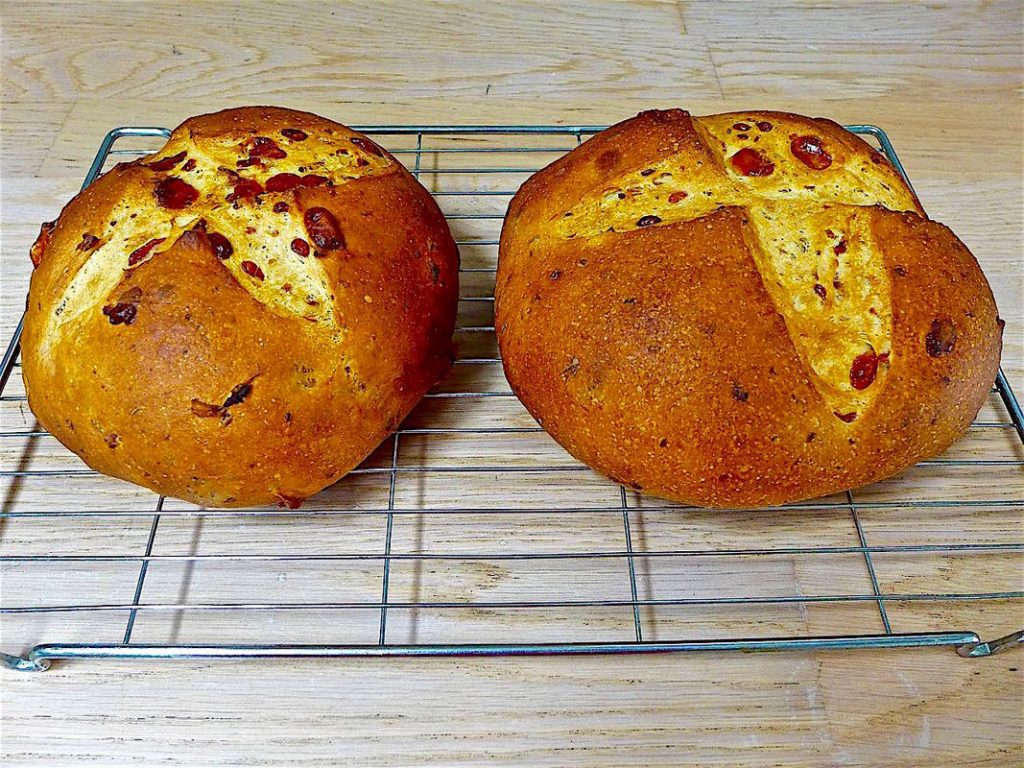 Hot out of the oven. Today’s bake tomorrow’s breakfast.

After cooling on a metal rack, I sliced a loaf to try out the bread. The crust is soft, the crumb also has a soft smooth texture and is nicely flavoured. The bread has a delicious aroma of fennel and the the taste of the cheese is very evident. A nice bread, and I would make it again sometime in the future.

“Now He who supplies seed to the sower and bread for food will supply and multiply your seed for sowing and increase the harvest of your righteousness;” 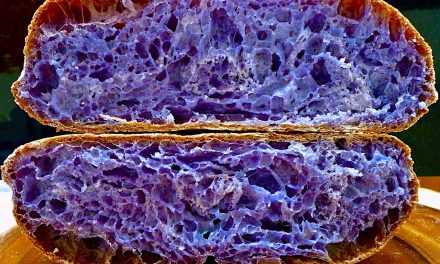 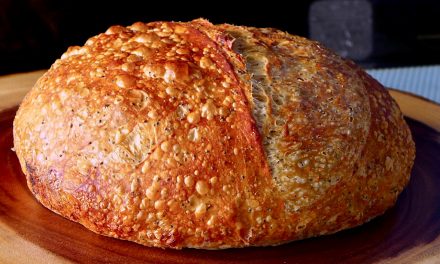 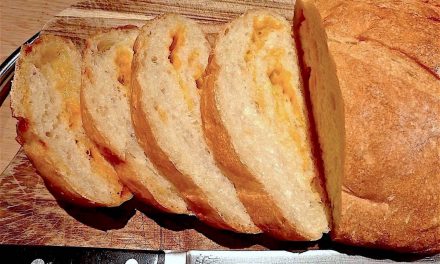 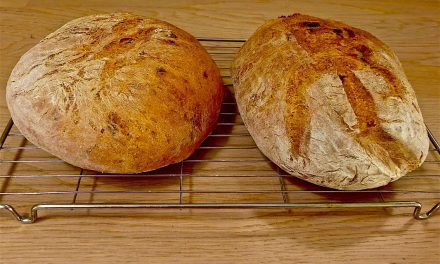